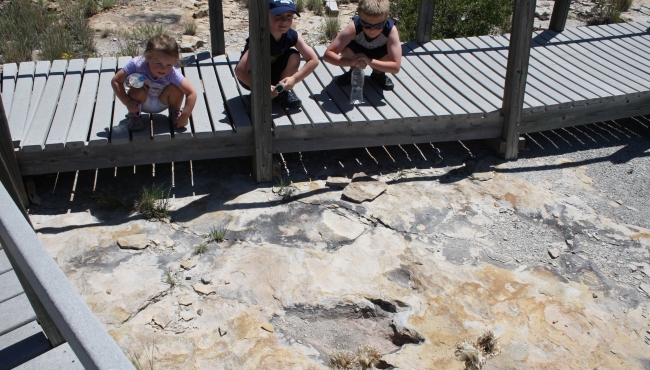 Road trips are a big part of America’s vacation culture.  I remember many hours spent in the car driving with my family to go camping or visit relatives.  Unfortunately, timelines often get tight so the actual driving part can be very boring for kids and doesn’t allow for many stops or side detours.  So when I started off on our “Great American West Road Trip” I knew I wanted to allow for some unexpected sightseeing in between our different home base destinations.  You never know what you can find, and if you’re willing to stop, some amazing discoveries await you!  We came across one by chance in the northeast corner of New Mexico, in route to Dallas, Texas from Colorado. 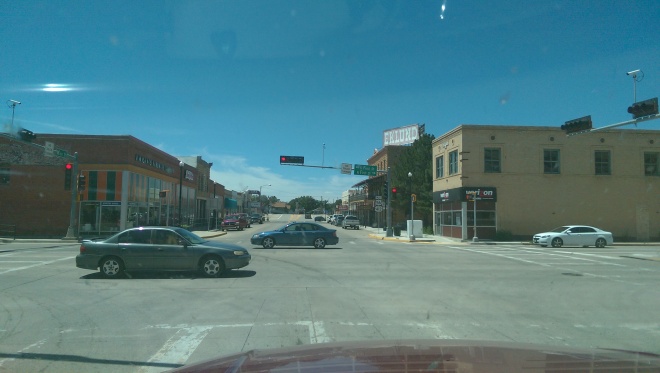 About 5 hours into our drive we were passing through the small New Mexico town of Clayton on highway 87 when I spotted some large dinosaur models on the side of the road in town.  The sign next to the triceratops and brontosaurus said “Clayton Dinosaur Track Way.”  I pulled into a parking lot to turn around and see what those dinosaur tracks were all about.  Next to the dinosaur models was a little tourist information building.  We went inside and inquired about the tracks.  As it turned out, flooding in the area near the lake washed away some ground cover that then revealed approximately 500 dinosaur tracks that had been preserved in the layers of earth below.  The woman in the office said it was 12 miles back west from where we were now, out at Lake Clayton, something we had seen signs for before entering the town.  The 12 miles didn’t seem too far to back track, even on a 35 mile per hour road and we had yet to stop to eat our lunches that I had packed in the cooler.  So off we went. 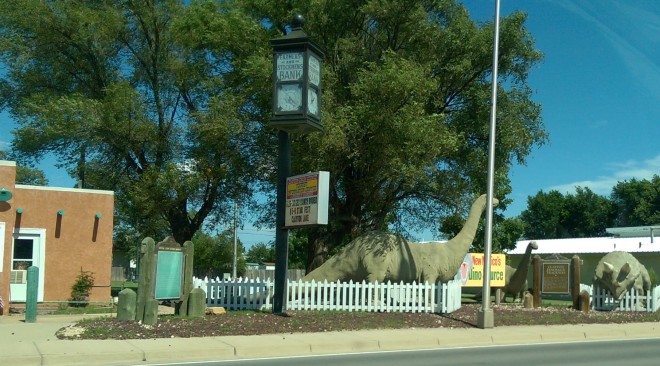 Dino tracks advertisement in the town. 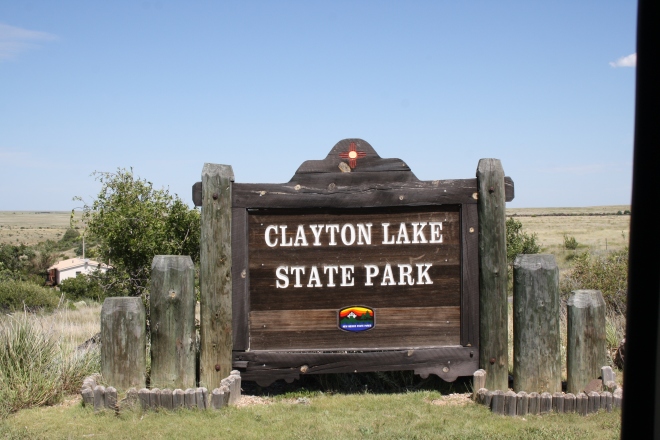 We drove the curvy road out to the lake in about 25 minutes from their downtown.  We drove into the park and found the sign directing down a dirt road to the dinosaur tracks.  We also noticed that different sections for camping and boat launching to go out on the lake.  We took the road directing us towards the track, at the end, you could park in a lot, but then had a quarter mile walk, around half of the lake, to the sight where the tracks were located.  We took a couple water bottles with us since the temperature was reaching 100.  The walk provided a few spots of shade along the way in addition to a bench under a tree half way along.  At the end of the quarter mile was a hut, with several informational signs inside about the dinosaur tracks.  It was a nice refuge from the sun and a chance for the kids to sit down one more time before we explored the tracks themselves. 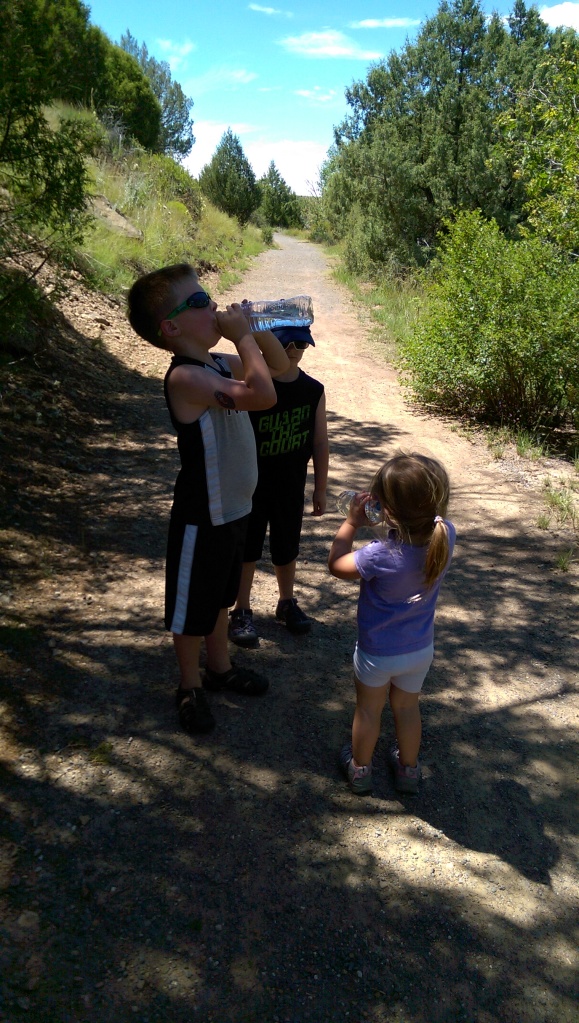 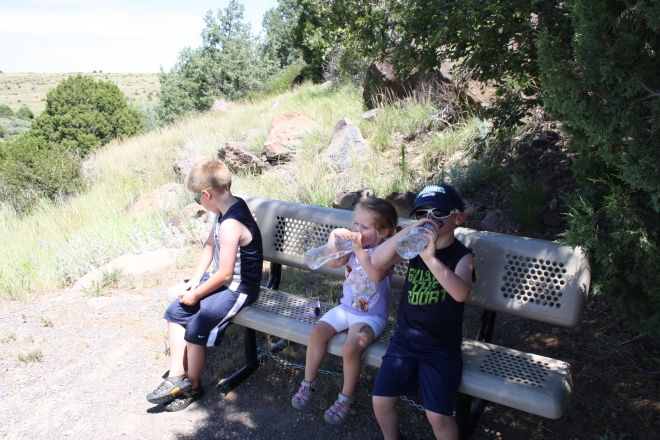 There were stairs that led down to the level of ground from the hut to where the tracks were.  A boardwalk encircled the most numerous and obvious collection of tracks to help preserve the find.  It was quite amazing to see just how many footprints there were.  That just like different types of animals today, they wandered around, intermixing and passing by different breads.  This was the first time that I had ever seen an actual dinosaur footprint!  I had scene a cast of one before in a museum, but never out in the natural environment where the dinosaur physically stepped and left it’s mark.  I have to admit, I think I was a little more blown away than the kids.  Nonetheless, they still asked some questions and thought it was “neat.” 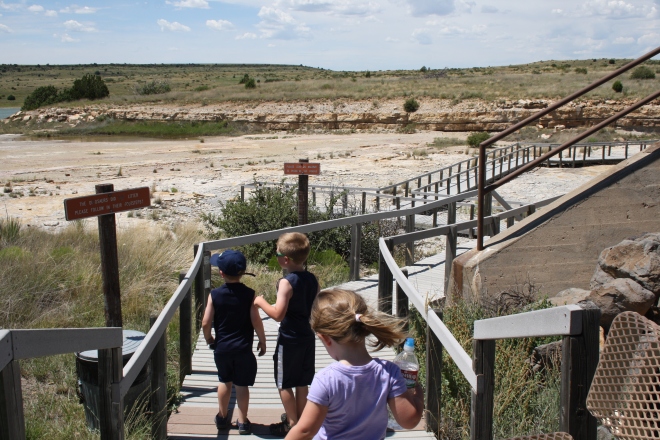 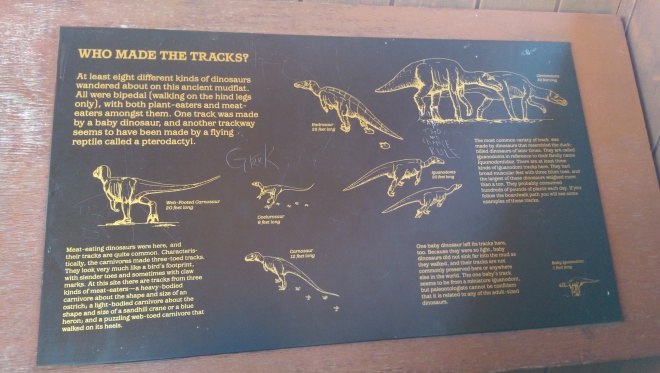 We slowly made our way back to the car, taking a pause again in all the shaded spots and being fascinated by the bugs that looked like a cross between a cricket and a butterfly.  At the car we unpacked our lunches from the cooler and set up acceptable eating stations at their seats so that we could get back on the road.  Our total detour time was 90 minutes.  Which put us about 30 minutes over the total of 2 hours that I had factored in for us to use as stopping time between southern Colorado and Dallas (we had stopped for an hour at a Wal-Mart that morning to stock up on water and food for the day).  But in the end, I marveled at the fact that we just stood next to the footprints of dinosaurs!  Something I will never forget and I hope my children will grow to appreciate. 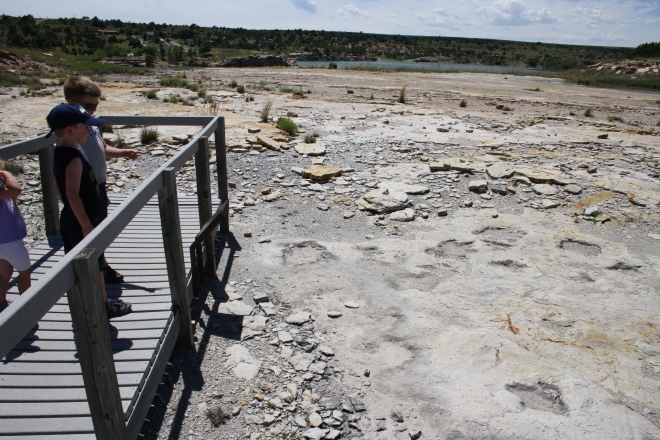 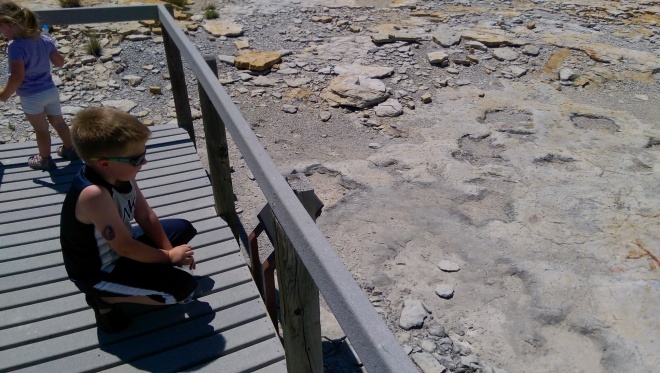