My experience flying a lesser known airline to Europe.

For travel from the US to Europe, one often thinks of the bigger airlines like Delta, British Airways, KLM or Air France, but there are many more out there.  Condor Airlines is part of Luftansa, a major German airline and while I’ve heard of them for a couple years, I had yet to give them a try.  I decided to do just that this summer.  Overall, our experience with Condor Airlines was positive.  I felt it was as “kid friendly” as the other major airlines for international flights.  Here are the important highlights, followed by a full description about our round trip flights: 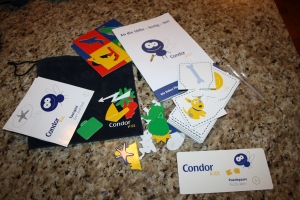 Activity sets given to children by Condor on the flight from Germany to the US.

Breakfast in Premium Class to Germany. Butter, cheese and game inside the covered area.

Toiletry bag given in Premium class. These socks were reused in unexpected colder weather as leg warmers for my 18 month old and the striped bag they came was reused several times on the trip.

A few things made me consider taking Condor Airlines for our flight to Europe.

Thankfully, we planned well in advance for this trip and #2 was actually true, they were offering some of the better prices at the time.  I also wanted to try them anyways as who could resist a non-stop flight to Europe with kids!  Those of you who’ve changed planes in Heathrow know what I’m talking about!!!  So here is the breakdown of our experience flying in each direction.

We were running late. Not, the gate is closing in 20 minutes late but not the full 2-3 hours before your flight that they always recommend. We were there and hour and a half before our flight.  Given that, you can imagine my surprise when we got to the ticket counter and there was no line.  We were helped right away.  There was a special going on since the Premium Economy and Business class was so empty, they were offering 2 for 1 upgrades and the Premium Economy upgrade was $200 bucks for 2 seats.  Since we had 4 seats and a through the night flight, I took the upgrade and spent the $400.  Our German neighbor girl contributed some for her seat too.  So far, so good right?  Well, kind of.  Even though there were six agents behind the 3 kiosks, there seemed to be some confusion about which computer they could process the upgrade and how to have us all together after they said they could have us all together.  Then, add on top of that, another angry passenger who didn’t bother to read the rules for the airlines (he specifically said he didn’t have time to read the policy and that he can’t be held accountable) was throwing a big fit because they wouldn’t let him take his carry-on on the plane as it was 15 pounds over the weight restriction.  Yes, this airline apparently checks carry-ons for weight restrictions if they look oversized or heavy.  He even went as far as to pointing at us demanding they check our carry-ons because he “KNOWS” they don’t meet the weight restrictions.  Some of ours didn’t but we could move around between the bags to make them meet weight.  But since we were upgrading to Premium Economy, we got a higher weight allowance anyways.  In the end, it took 6 people who all seemed a bit confused, to get us upgraded and deal with the other passenger and left us with just 40 minutes to get through security and to our gate.

We made through security and to our gate just in time to make the pre-boarding for small children.  The staff was friendly from the start and we did have a nice amount of extra leg room in the Premium Economy and baggage stored nicely.  I was happy to see the monitors at the back of the head rest and that we had comfortable over the ear headphones for the kids.  Our main problem with the flight however, was lack of water and the cabin often was warmer than seemed necessary.  When we did get water, the water was warm.  Apparently, they ran out of ice mid-way through the flight.  I would say that was my biggest complaint of the journey, insufficient hydration.  Thankfully we had our own water bottles, but it was complicated to use the ones we brought.  (See previous post on why).  Once we arrived in Frankfurt, it was relatively easy to get off the plane, make our way through passport control and get our luggage.

Our flight from Frankfurt back to Seattle, USA

It was a very rare occasion that I was actually really early to the airport, and good thing!  We arrived 3 hours in advance to find an incredibly LONG line to check in and check bags.  For most flight to the US from major international airports, you cannot use the self check-in kiosk.  You must show ID to an airline employee.  The information lady told us it would take about 15 minutes to get through the line. It took 45 minutes.  Still however, it was not as long as the line of people behind us when we finally got to the counter.  They had about 12 different agents at computers checking people in.  From there we went towards the gate. For flights to the US, the security is actually just before you go to the gate, rather than the general airport security.  We waited about 20 minutes in the long line before we got close enough that an agent saw that I was with 3 kids and a stroller and pulled us up to a special line.  Of course not everyone arrived 3 hours in advanced and due to that and the security rules, it takes longer to get everyone through to the gate.  So our flight took off about 20 minutes late.

Once on the plane, we headed to our seats in coach class and found a new bottle of water in each seat. WAY nicer than having to nearly beg for water on the flight over and then to just get little cups.  We settled in fine, less room of course from Premium Economy, but standard.  One annoyance was no plane for alternative payment when their credit card machine was broken and we wanted to buy the code to access the full Premium TV package.  About an hour after it was announced that you could buy it, we finally were able to pay and purchase the package and watch something. Shortly after we got the digital entertainment squared away, a crew member came by and handed out various toys and games to the kids on the plane, something that was never offered to us on our flight from the US to Germany!

In all, I would fly Condor again if there was a significant difference in price between them and the other airlines.  By significant I would say at least $200 less than other tickets given that on Delta and British Airways, I can get kid friendly meals and gluten free meals for free, more free kids and adult movies and kid activity packs in each direction.  With the extra fees for entertainment and meals in both direction, that would add up close to $200.