My husband loves Austria, and I don’t blame him.  The entire country is full of beautiful landscapes and marvelous cities.  While I’m a little more of a fan of places like Vienna and Salzburg, Austria is one place that a city girl can enjoy the outdoors with her adventurous husband without having to hike 10 miles with mountain gear on your back.  Maybe a 20lb toddler instead.  Here is our arrival and day one in this beautiful part of Austria that turned out to be one of our BEST family vacations! 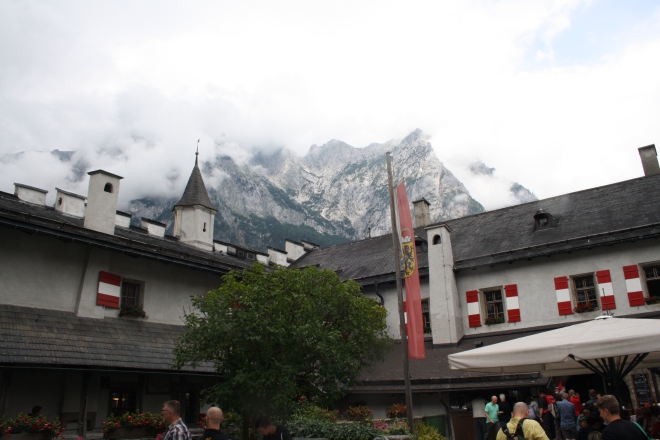 For this trip, our destination was determined by what was available through our timeshare exchange that would sleep five people (a majority of European properties are for two to four people).  There happen to be an exchange with a hotel in Sankt Johan im Pongau.  It was a large sports hotel, next to a mini shopping “mall” and across the street from a lovely park with a playground.  The Alpine Sports Hotel lived up to its name.  It had its own racquet ball courts, a large swimming pool and a group fitness/dance room.  The staff was incredibly friendly and offered tour and vacation planning services as well as housing two restaurants within the hotel.

Immediately after hitting up the tourist pamphlet stand for the whole Pongau area, I wished we had planned for longer than three days.  Our reservation was just for three nights and four days (Monday through Thursday) as that was all that was available when we booked through RCI.  Our plan was to go into Slovenia on Thursday for two days before returning to Munich.  After our late arrival in Austria on Monday night, I came up with a proposed plan for how to spend our few days in the Pongau region.  As it turned out, the world’s largest ice cave was located just 20 minutes north of our town!  It immediately became a priority for our trip.  Across the highway from the mountain with the ice cave was a hill top castle as well.  The Tuesday morning goal was to feed the kids then head to the castle followed by an afternoon tour of the ice cave.  On the drive to the castle, I happened to read the brochure for the ice cave again and it said to allow for 6 hours! It also said that the last gondola up to the top of the mountain was going to be at 4:45 p.m. that day.  Still, I was not discouraged!

We arrived at the castle with the threats of rain looming over us and about an hour behind schedule.  To get to the castle, there was the choice of a 15-20 minute walk up to the top or quicker option, the gondola.  To save time, we took the ride.  The castle, “Burg Hohenwerfen” turned out to be a gold mine for the kids! It was well kept, had the feel of walking into a knight’s strong hold, and had marvelous programs and activities specifically for kids!  At the ticket office we were given a story book map for each of the kids.  There were stations around the castle that you have to answer the questions for to solve a puzzle at the end.  When you got them all correct, you could take your booklet to the office at the exit for a little treat.  This immediately captured the attention of our two boys (6 & 4 years old) who had grown accustom to walking around Castles and Palaces that sometimes got boring.

The ride up to the castle.

In order to go into the interior rooms of the castle, you had to meet in the courtyard for an official tour.  Fortunately for us, the English guided tour was to start about 15 minutes after we arrived and the line was much shorter than the German one.  In addition to the guide, we also had the electronic wands that gave added information about each room.  The kids got their own special wands with a unique children’s program that highlighted more interested points for them in a fun story book kind of way.  I listened to a few and had wished we all just got the children ones!  While there were not elaborate rooms with lots of furniture in this castle, we did get to go up into their working clock/bell tower.  It should be noted that this included some narrow and steep stair passages.  I had my 18 month old on my back in the Ergo.  Had I been alone on this particular tour, it may have been difficult to guide the two boys and balance myself with the baby on my back up and down the stair cases in very tight quarters.  One parent who had carried their child in their arms, even accidently whacked the poor little one’s head on a wood beam while trying to descend. I was thankfully with my husband on this part of our trip so we managed, and the view from the top of the bell tower was worth it!

A special kids guide in English for the tiny tourists.

After the tour of the castle, back in the courtyard, we played with several old fashioned games they had set up in different stations.  There were walking stilts, wooden unicorns that you tossed rings over the horn, and then a ball pendulum that you tried to knock over pins with in a circle.  All three of the kids had a wonderful time playing the games.  It was tough to drag them away, but I was bent on getting to that ice cave before the last tour and their booklets with the scavenger hunt puzzle was a nice incentive.  We didn’t sit to watch the hawking show because we wanted to finish the kids’ hunt and go to the ice cave.  This I regret.  Even though we spent about 4 hours at the castle, I felt we could have spent the entire day!  But, it was time to get on over to the ice cave in my mind.  Despite me being in a hurry, the kids wanted to walk down to the car through the trails, so we did.  It provided a nice conversation about why we stay on the path at historic and natural sites and a brief lesson in soil and root erosion. 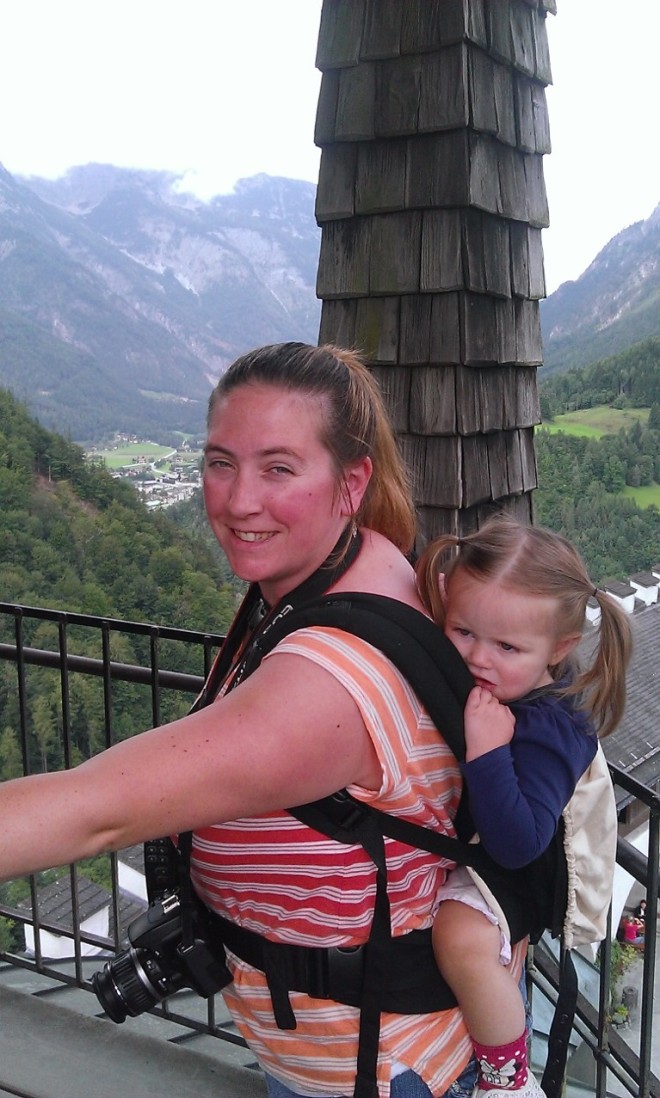 Top of the bell tower.

Back at the car we headed the short distance across the highway to the road up to the next mountain for the ice cave.  I didn’t know what to expect as we approached the parking lot stages.  We arrived at a place to park rather close to the “entrance” and had one hour before the last tour was going to start.  We weren’t sure if we should take the stroller or just the ergo.  Since we were in a hurry, I thought we’d try the stroller.  By time we got up to the ticket counter, we had 50 minutes left to make it to the cave entrance and they told us it was a 20 minute walk to the gondola and then another 20 minutes to the cave entrance from the top of the gondola. The whole time my husband kept telling me that we should just wait till the next day, that they kids couldn’t do it, that we wouldn’t make it.  But my stubborn self would not listen.  I knew the kids could do it, and just felt he didn’t know them as well as I did and I would “show him” that he was wrong.  So we purchased the tickets after asking if a full refund was possible if we didn’t make it.  They said yes, the ticket had 2 parts, one for the gondola and the other for the cave tour and they tear off a piece of the ticket at each stage, so which ever wasn’t torn off, we’d get the refund.

View of the castle from the ice cave mountain side.

With tickets in hand, we started up the mountain.  Now, one would think, knowing that it was a mountain we were going up, that I would have anticipated just how steep the walk was going to be.  However, as gradual as the path up looked, it turned out to be pretty exhausting to push the stroller up the path with a toddler in it!  We pushed on, panting, and my husband incredibly annoyed at the speed I was trying to push everyone.  After 18 minutes, we made it to the gondola station, only to find a really long line.  I was still optimistic that we would make the last tour, until 5 minutes went by and no one moved.  Then 10 minutes and the gondola had then come 2 times and we barely made progress.  I’m ashamed to admit I was in a full 2 year old pouting fit.  It was clear we weren’t going to make it up in time for the tour.  I was so mad and even blaming the ticketing counter for selling us a ticket when they clearly must have known there was no chance that we’d make it.  “If they had just told us there was no chance to make it, we wouldn’t have suffered through the first leg of the hike for nothing!” I reasoned.  But in fact, my husband told me this, and the ticket counter told us what the hike times were.  Even without a wait at the gondola, we only had a 5 minute window for error on the hike times alone.  I learned a tough lesson that day, actually a few tough lessons and reminders.  1. Your attitude effects everyone on the trip. 2. Sometimes your spouse IS right. 3. Don’t rush your experiences, quality rather than quantity is going to give you the better outcome and memories on a vacation.  Had I just resided myself to the fact that we were going to just do the castle that day, we could have also learned more about the birds and scene the falcon and hawk show and, if something (like the ice cave) is important enough to visit, you will make time for it.  As we did the next day of the trip.  With so much to see and do in that area, I was so set on getting to try out as much as I could.  But the thing is, you won’t really miss getting to do the thing you don’t see, but you will miss getting to do the stuff at the place you do visit and rush through.  So, learn from my mistake and take your time!  And check out the next post coming soon about our big day in the ice cave!  We did make it, the following morning, and from parking lot start to finish, it was a 6 hour adventure that was well worth the wait!!! 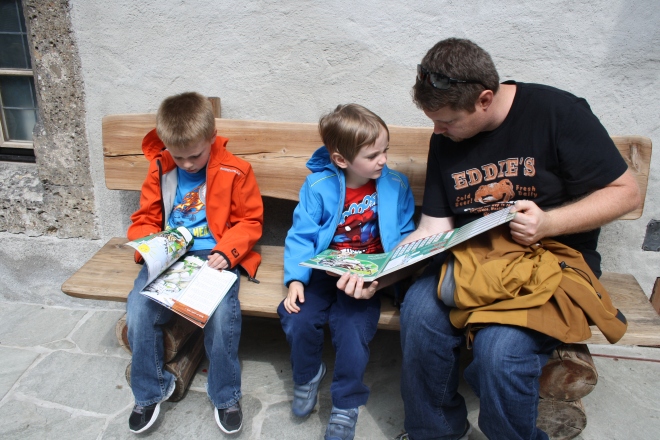 The boys checking their final answers from the scavenger’s hunt.